June 13th, 2012 Posted by freewaves Events, News No Comment yet 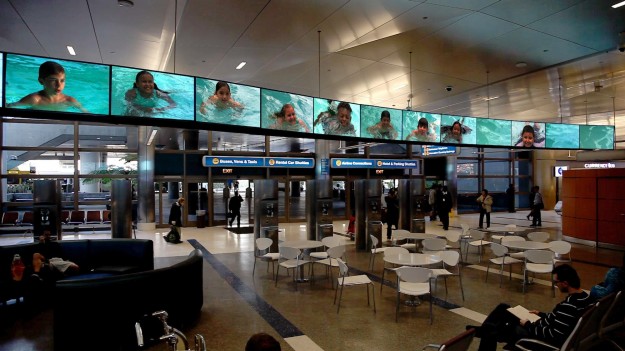 Los Angeles, Calif. – CELEBRATE with Freewaves and the artists the completion of “SEE CHANGE,” 2 groundbreaking video installations featuring 27 original, site-specific artworks, located in the lower-level arrivals hall of the Tom Bradley International Terminal at LAX, permanently accessible to the public.

The reception, on Saturday, June 16, from 5 to 8 p.m. is free and open to the public. Parking will be validated.

People, SoCal objects, nature and places are the artists’ subjects. Half of them are from L.A. and some of them refer specifically to L.A. but all considered the factors: airport, waiting, and international travelers. The videos range from meditative to chaotic from heavily montaged to linearly documentary, and from digitally manipulated to hand drawn animations.

Artists, engineers, curators, administrators and a programmer negotiated over 7 years to make this complex system come to life. Each artist took this colossal opportunity in a different direction; yet each explored the arena between space and time  (3d to 4d), compressing or expanding “real time” of human eyes.

Trillions of pixels swim around the 80+ synchronized TV screens of video art at LAX.  These many screens’ significant advantage over one screen is their accent on differences. Different images side by side beg for comparison. Difference is their norm.

The modernists’ decisive moment has been replaced by many moments often from different angles, like from different window seats in a plane. Are you looking from the point of view of travelers, greeters, airport managers or cleaners? The multiple monitors of related images ask viewers to compare and contrast frames unconsciously. How they differ hints at artists’ intentions. Some present micro-changes between frames asking one to analyze subtle variations in nature, specific neighborhoods and distant cities.  How similar are they?  The meaning inhabits their differences, for example, are we careening around the world or spying on one patch of nature?

The results remind us that motion is the blend of time and space. Categories can be blurrier than we think. Chance might play a role. The frames’ relationships show how far in time or space we have moved. Which place or time is right? Can they both or neither tell the truth? Can we separate them to see each independently? How many truths are there? Come to LAX to find out!

The infamous Karen. Who is she? Where did she come

“What is the opposite of racism? I came up with

Always free & here for you 💖 Learn about one of

ATTN: White allies in the USA Don’t take it pers

“Language is an approximation.” - @dasha_kell

ATTN: White Allies in the USA Don’t take it pers

“Some Aspects and Assumptions of White Culture i

Some Aspects and Assumptions of White Culture in t

There has been a problem with your Instagram Feed.